The first time I saw you, I cried. As the nurse brought you to me, she said “Such a sweet moment for you, hon.” Most of my tears were of happiness. I smiled at her, hoping she couldn’t tell that I also cried out of fear. Fear that you were so small and weighed less than anticipated. Fear that you were born too early. Fear that something may be wrong with your health. I wished you were bigger.

You struggled for a bit to latch on. Your mouth was so tiny that I initially had to use a syringe to give you breastmilk. But you were a hungry little guy…a lactation consultation and a couple of days later, you became a pro. The doctor announced you were free to go, all four pounds of you. I looked down at you in your preemie outfit. I wished you were bigger.

We nervously carried you in your new car seat to our vehicle. Checked, double-checked and triple-checked that everything was okay. The nurse giggled and said, “You’ll be ok!” as she walked back into the hospital. I sat down next to you and nearly forgot to strap myself in. “Be careful,” I sternly told your dad (more times than merited).  Cars and trucks seemed to roar by us faster and louder than usual. You slept, well, like a baby. But all I could see was how we had to roll up swaddling blankets to secure you in place because I felt your little body was going to move around (it wasn’t). I wished you were bigger.

For months, I’d watch you sleep. I’d lay next to you and watch your belly rise and fall while my eyes burned in need to be shut. “Get some rest,” your dad would say. But I couldn’t. Besides having the baby blues and anxiety, I was terrified of SIDS. It wasn’t until I bought a breathing monitor that I secured to your diaper every time you slept that I finally slept more than an hour at a time. It alerted me twice. And twice it was because it fell off your diaper. I’d fall back asleep after a sigh of relief. I wished you were bigger.

Before you turned one, you woke up one night crying uncontrollably. I checked you for fever. A soiled diaper. A bug bite. Anything that could cause you discomfort. But you continued to cry. I wanted you to tell me what was wrong so I could make it better. But I couldn’t find any clues on your red, little face. I consoled you for hours until you fell asleep in my exhausted arms. I never knew what it was that made you cry. I wished you were bigger.

As a speech pathologist, I was very much aware of you reaching milestones. I gave you a little time and tried not to worry, since you were born a little early and all. Your birthday rolled around and still no words. I became a little concerned and inevitably planned language activities for you. At fifteen months, your first word was ‘mouse’ as we watched Disney, Jr. I wished you were bigger.

One day I took you to Hobby Lobby as I searched for artificial flowers. I turned my back for a second. I grabbed the perfect stem and turned to place it in the cart where you were sitting. A woman had approached us, unbeknownst to me, and your arms were reaching for her as you looked at her with your gummy smile. “He is so cute,” she said. I smiled but didn’t like that you didn’t recognize she was a stranger. I wished you were bigger.

We went to the park and I followed closely behind you on the small jungle gym. “Déjalo jugar sólo,” your grandma would say (let him play by himself). I was afraid you would fall while climbing the stairs. You were a clumsy little toddler. When a bigger boy bumped into you by accident, you cried because the pebbles scratched your hands. I wished you were bigger. 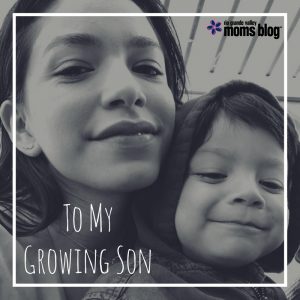 Pre-school started in August. Although you initially took to the new schedule well, there were days that you cried as I left you at your classroom. My heart would break a little at the sight of heavy tears rolling down your cheeks. But I wanted you to understand that I was taking you there for your benefit. I wished you were bigger.

You are four years old now. “I’m a big boy, mommy!” you proclaim occasionally. You are growing just as you should. You dress yourself, tell me when you need to go potty, can identify if you have a tummy ache and even know the code to your iPad (seriously).

You surprise me with the things you say, the wisdom in your little heart and how your personality is one of its kind. I’ve longed for this stage in your life for so long. And now that it’s here, I have a few requests to make.

Because I’ve realized that after four years of wishing you were bigger, now I wish I could stop time.

But for tonight, I’ll look at you lovingly as you sleep next to me, kiss you gently on the forehead and revel in the moment. My wish, my son, is that no matter how big you get, you will always stay my baby. 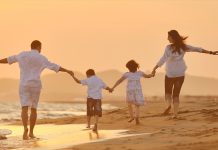 From Mine to Ours: Before Kids vs. After Kids

Anastasia - June 9, 2021 0
Real summertime is here! Not to be mistaken in south Texas with the early arrival of hot days in early spring. School is out...